An Analysis of PCB Industry

In 2016, the size of electronic information products manufacturing industry in China measured RMB12.2 trillion, increased by 8.4%, and made a total profit of RMB646.4 billion, which means a 16.1% year-on-year growth. Globally, the figure became over US$2 trillion.

In 2016, the size of electronic information products manufacturing industry in China measured RMB12.2 trillion, increased by 8.4%, and made a total profit of RMB646.4 billion, which means a 16.1% year-on-year growth. Globally, the figure became over US$2 trillion.

2. Steadily growing total available market; “Electronic Plus” alongside Intelligence and Internet of Everything

3. Changes in physical form and structure are possible (including SIP and new materials), but not in its essential attributes as “circuit board”

4. Bubbles are not likely to happen to tailor-made B-B products, but yes to non-differentiated B-B products, which results in excess production capacity.

5. It is a highly decentralized industry, where CR5=20%, CR10=32% (because of tailor-made manufacturing) 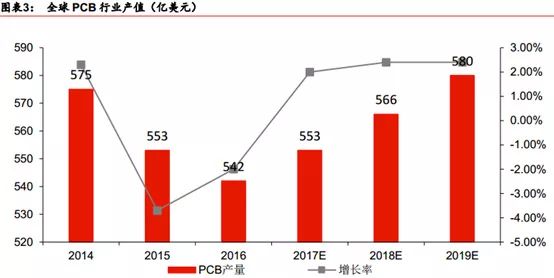 PCB industry is expected to achieve a output value at US$56 billion in 2018, 2% up from the previous year. At present, China takes 50% share of this output value (plants built in China with foreign investment are included). 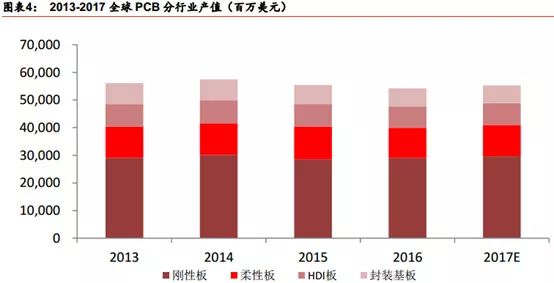 High-end products are in greater demand, with FPCB, HDI PCB and Multilayer PCB playing the leading role in growth rate. Newly added production capacity is focused on production expansion of

3. Downstream applications and proportions over the years

From the figures of enterprises and percentage of amount it could be clearly observed that enterprises in Taiwan grew very fast in the period. Chinese companies are expected to learn from Taiwan to seek development.

Data for 2015 and 2016 begins to show the rising of Chinese companies. 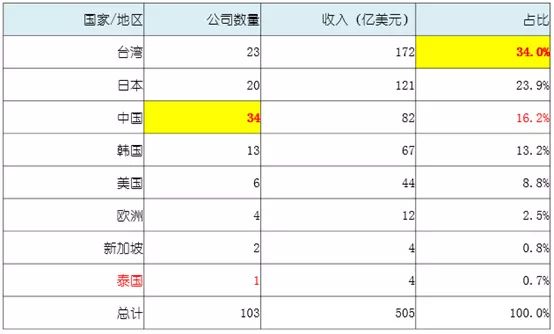 113 companies across the world are listed. Among them, 45 are from China (11 more than the previous year), and account for 39.8% of the total. Listed Chinese companies gain a 13.5% increase in business income, while the global PCB top 100 suffer a recession by 2.1% overall. The latter figure becomes 5.2% if Chinese players are excluded. The best Chinese-funded companies are ranked between 20 to 30, which means great potential. 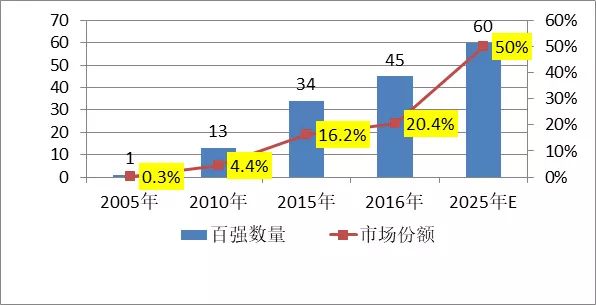 1. Chinese-funded companies are expected to contribute over 50% of global PCB production value (20% at present).

2. There is at least 30 percentage points of room that values RMB150 billion (RMB500 billion in total).

4. Chinese-funded companies may take over a half seats of top 30.

5. A crowd of RMB10 billion-level Chinese-funded PCB companies is expected to emerge.

A brief review of recession in markets elsewhere

The global financial crisis in 2008 has blown the once towering Japanese electronics industry down hill. The worst came to the worst, drastic shrinkage of overseas market demand, yen appreciation and quickly rising international rivals cut off the space of growth for the electronics industry in the country. Japanese companies used to do their utmost to make details perfect, yet were less capable in adopting all-in-one solutions to deal with customers and market change, which make the industry chain less flexible.

Market in the Republic of Korea 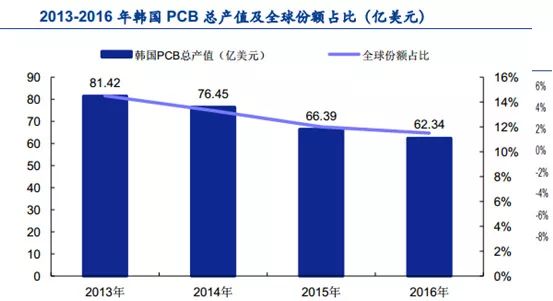 Korean companies like Samsung and LG played a key role in driving up the consumer electronics industry chain in the country. Domestic PCB companies are engaged in all sectors across the chain, from equipment to materials to manufacture, achieving a very high import substitution rate. With more and more advanced technology imported from Japan and the US, Korea shifts its direction to high value-added products, including multilayer PCB, HDI PCB, FPC, RF-PCB, IC Substrate. The product structure has always been modified and upgraded. Everything has two sides. 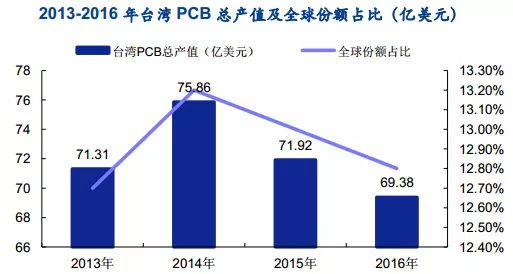 The overall prosperity of the industry in Taiwan is mainly attributed to middle and high-end consumer electronics. At the time the demand for these products is fully initiated, the industry goes into recession because of the ceiling of market. (Please refer to the growth rate of mobile phone industry over the past two years.)

However, the market in Taiwan serves as the best reference, here shows how Taiwanese-funded enterprises grew during 2000 to 2015


PCB entrepreneurs emerged one after another 20 years ago, who brought up a number of outstanding Taiwanese-funded companies including Tripod-Tech, Unimicron, Nanya, Hannstar, Compeq and ZDT. There appeared nearly 40 listed companies (OTC listed included). Features:

Starting point at a considerable scale: NT$4 billion, or approximately RMB800 million or US$100 million, among NTI Top100 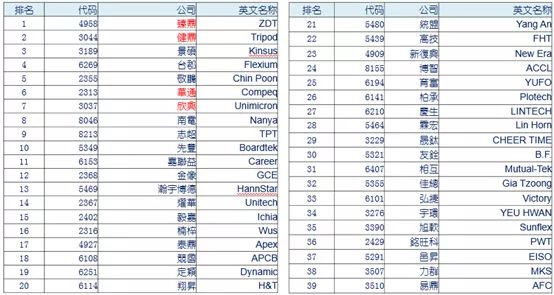 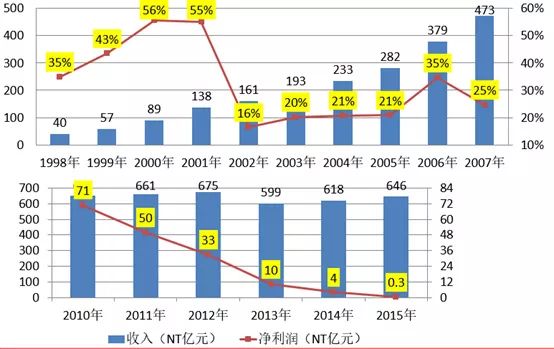 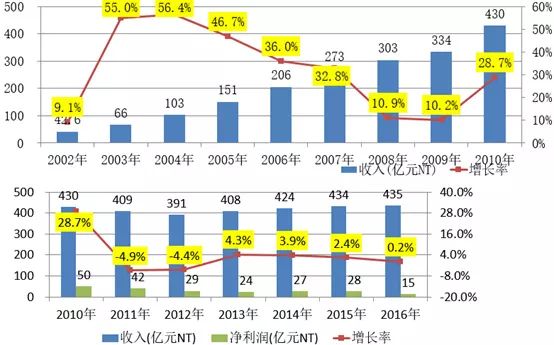 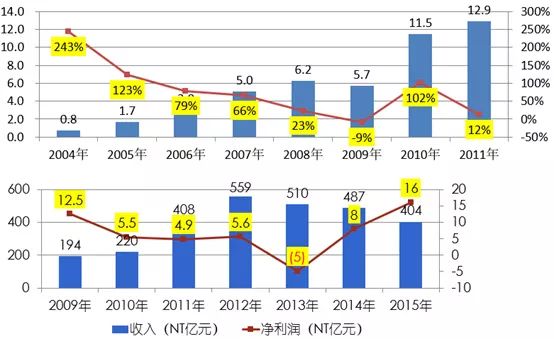 In the course of industrial transfer, there emerged in Taiwan a large number of stocks with tenfold growth. Each of them resumed several leading companies. This tenfold growth was totally attributed to business performance. Estimated value thereof fluctuated between fifteenfold to twentyfold.

After ten years of golden age, the ceiling was reached. Pursuing for equipment investment (the most expensive equipment, costly maintenance, high depreciation, difficulties in reformation) sharply weakened the ability to make profit. No successors to take place the first-generation entrepreneurs; problems in professional managers; out-of-reach management; huge amount of salary and benefits.

A chance for Chinese-funded companies to overtake 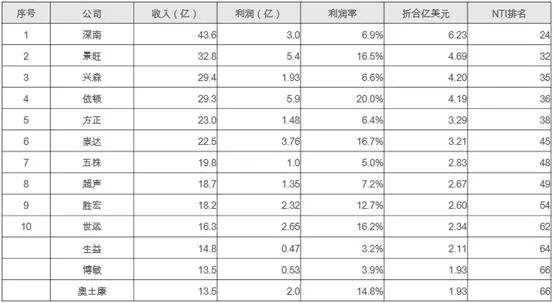 Multi-dimension transfer at the same time

Tremendous space for growth of companies


2. There are 45 Chinese-funded companies in the NTI Top100 list. Suppose 10 of them to share RMB100 billion, then each has RMB10 billion-value space for growth.

1. Entrepreneurs emerge in flock: In the full vigor of life, ambitious, striving for expansion;

4. Starting point of growth at large scale: There emerged a great number of private companies starting at US$100-200 billion;

1. Automatic and intelligent manufacturing: Improved efficiency per person, with Victory Giant, Suntak as representatives. For basically no change in its staff size, Suntak expanded from RMB1.1 billion to RMB3 billion, and achieved output value RMB590,000 per person in 2016;

5. One-stop model: Kingbrother, Fastprint offer service from designing to manufacturing, from components to testing and certification. Service is top priority.

1. Even shorter electronics product life: Companies able to cover the product life from design at the beginning till manufacturing would seize the opportunity of development; (Design + Tailor-made production service)

2. Electronics products have become even more complicated, and those of high precision including HDI, FPC and mSAP as well as SLP will see greater demand; (Leading technology)

3. For higher level in industrial centralization, Chinese companies are expected to become hard-core manufacturers of PCB, and to take a greater market share; (Advantage in scale)

2. Restriction on production because of environmental protection policy in Kunshan

3. Foxconn became listed, with PCB taking a 40% share of costs.

On December 24, 2017, a hearsay was spread in the market that the Kunshan authority issued an official document, requiring companies within the Wusong river valley to stop production for half a month. Totally 270 enterprises were affected, including Taiwanese-funded companies such as Advantech, Career, Giant and Wus. Here are PCB companies across the industry chain involved: 6 from FPC sector, 49 from RPCB, 3 Epikote and 1 CCL.

However, a message soon is released to suspend the production halt. Even so, there were some Taiwanese-funded companies expressed that they were considering to relocate production capacity because of lingering fear. With solely a document, the local government could require them to stop working. Besides, environmental protection awareness became stronger and stronger in other places, emission cut was also strictly enforced.

On March 6, Du Xiaogang, secretary of municipal party committee and mayor of Kunshan, attended as an NPC representative the Jiangsu delegation discussion meeting. He pointed out that under the quality-oriented development of Chinese economy, Kunshan industry was expected to focus on middle and high-end products by giving priority to restructuring, upgrading, innovation, quality and effectiveness. On environmental control, Du expressed that the public had shifted their need from food and clothing to good environment, from subsistence to sustainability. So Kunshan was going to make great effort to beautify eco-environment, set up ecologically friendly facilities, do more to clean up polluted waters, strive to conduct ecological restoration, and fight against pollution, in a bid to make the surroundings beautiful while developing quality-oriented economy.

Favorable factors for the future

1.  Weakening capability to make profits among Taiwanese-funded and Japanese-invested companies

2. Expected RMB devaluation, increasing exchange gains and losses (one of the factors to drive up industrial profit growth in 2006)

3. A window period of “price bonus” is expected in two years’ time for CCL and copper film

4. Chinese-funded PCB companies are to be ranked top in the world in profit rate, in addition to stronger ability to re-invest.

5. Accelerated IPO will be good for players to raise fund and expand.

6. With Chinese-funded PCB companies giving play to “late-mover advantages”, the labor-intensive industry will be transformed directly into Industry 4.0

7. Positive and collaborative development of industry

This article has been reprinted by editors under this Site for purpose of information sharing, which shall not be deemed our approval thereto, nor our guarantee of truthfulness thereof. We shall delete any of such article upon your effort to contact us within thirty (30) days for any problems in relation to the text, copyright thereof or otherwise.

[Disclaimer]  All copyrights of articles posted on this Site shall be reserved by the original author. Opinions in such articles are of the author. Everything offered by this Site shall be deemed information for purpose of reference, and shall not be taken as our suggestions on investment or application. This Site reserves the right of final interpretation to this Disclaimer.