In a battery electric vehicle, the power system driven by electricity would completely replace traditional ones. This leads to PCB increment for replacement attributed to the electronic control system (MCU, VCU and BMS). As for hybrid electric vehicle, with the traditional power system reserved, a new electric drive system is introduced, which creates PCB increment for superposition. 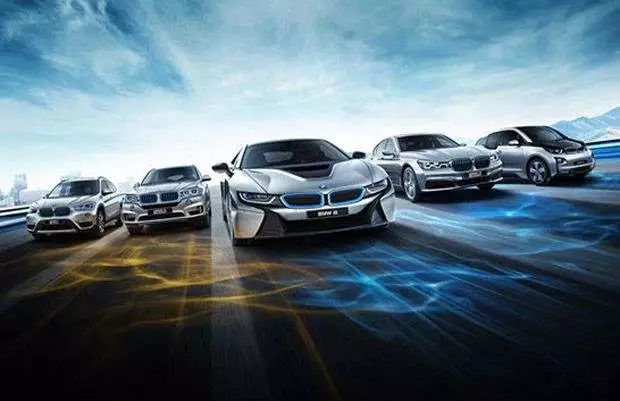 Currently, as electronization is applied to vehicle at a low level, PCB is not much needed, and its value is low, too. Of overall costs of electronic device, PCB accounts for only 2%. For each vehicle, about one square meters of PCB in average is used, US$60 in value. This figure becomes 2 to 3 square meters in the case of a luxury car, US$120 to 130 in value. Among electronics components applied to traditional vehicles, those in the power system need PCB the most, accounting for 32% of the total, mainly the engine control unit, engine primer, electric generator, transmission control device, fuel injection pump and power steering system. In the body electronic system, the figure is 25%, including lighting, HVAC, power-operated doors and seats, and TPMS. Then the security control system with ADAS, ABS, etc., 22%, and the on-board electronics system for display and recreation. 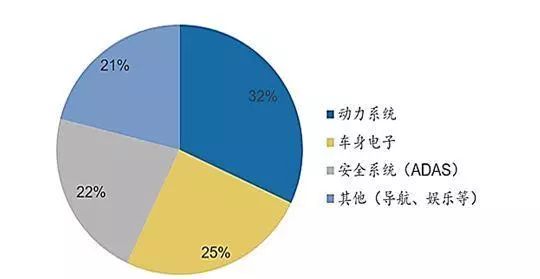 Shares of PCB Value Taken by Various Systems in Automobile 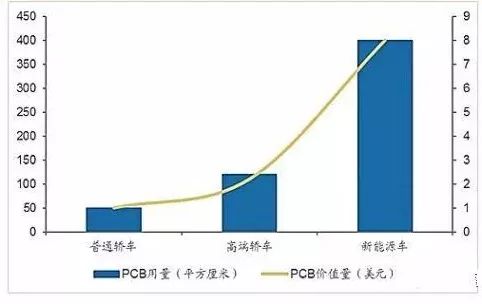 Quantity of PCB Needed for Three Kinds of Vehicle

Compared with traditional counterparts, new-energy vehicles pose significantly higher requirements of PCB for its unique power system. This family has mainly two members: battery electric vehicle and hybrid electric vehicle. The former has its power system simply consists of electromotor and power battery. But for the latter, there are both engine and electromotor. Usually, the vehicle is driven by the engine that consumes fuel, and by the electromotor if the battery is adequacy charged.

In a battery electric vehicle, the power system driven by electricity would completely replace traditional ones. This leads to PCB increment for replacement attributed to the electronic control system (MCU, VCU and BMS). As for hybrid electric vehicle, with the traditional power system reserved, a new electric drive system is introduced, which creates PCB increment for superposition.

VCU: Composed of control circuits and algorithm software, it is the control center of the power system. It works to supervise the vehicle and make decision for overall power control. PCB is a must to control circuits inside VCU, and the quantity needed is about 0.03 square meters.

MCU: Made up of control circuits and algorithm software, it is an important unit inside the electronic control system. MCU controls the electromotor following the instructions made by VCU, so that the motor exports alternating current accordingly. PCB used for control circuits totals 0.15 square meters.

BMS: A critical component in the battery unit, it controls discharge and recharge by collecting and computing voltage, current, temperature and SOC data, and thereby protects and manages the battery. Its hardware is composed of the BCU and BMU. BMU is set inside the module, and works to examine individual voltage, current and balance control. The BCU could be located optionally. It works for relay control, SOC estimation and electric protection. BMS is usually made of multilayer PCBs that are better in stability but higher in price than other boards. It works to supervise the data of voltage, current in individual batteries, realize balanced control and prevent battery from damage of service life or functions due to overvoltage or overcurrent. For its complicated structure, BMS requires a lot of PCB. About 0.24 square meters for the master control circuit, and 2 to 3 square meters for individual management unit. 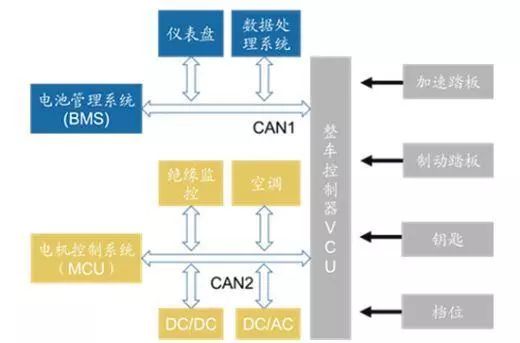 On this basis, in 2020, new energy vehicle is expected to bring about RMB3 billion increase to the domestic automobile market. According to the International Energy Association, the global total of sales volume of this kind in 2020 will reach 6 million vehicles. Therefore, the global automobile market is going to gain a RMB12 billion increase from new energy vehicles. 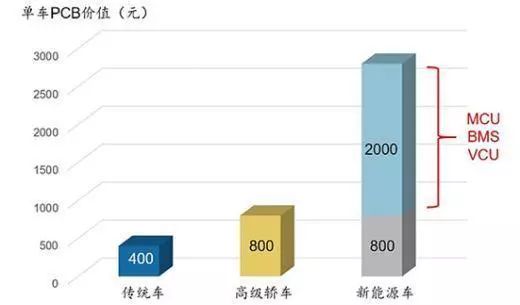 This article has been reprinted by editors under this Site for purpose of information sharing, which shall not be deemed our approval thereto, nor our guarantee of truthfulness thereof. We shall delete any of such article upon your effort to contact us within thirty (30) days for any problems in relation to the text, copyright thereof or otherwise.

[Disclaimer]  All copyrights of articles posted on this Site shall be reserved by the original author. Opinions in such articles are of the author. Everything offered by this Site shall be deemed information for purpose of reference, and shall not be taken as our suggestions on investment or application. This Site reserves the right of final interpretation to this Disclaimer.